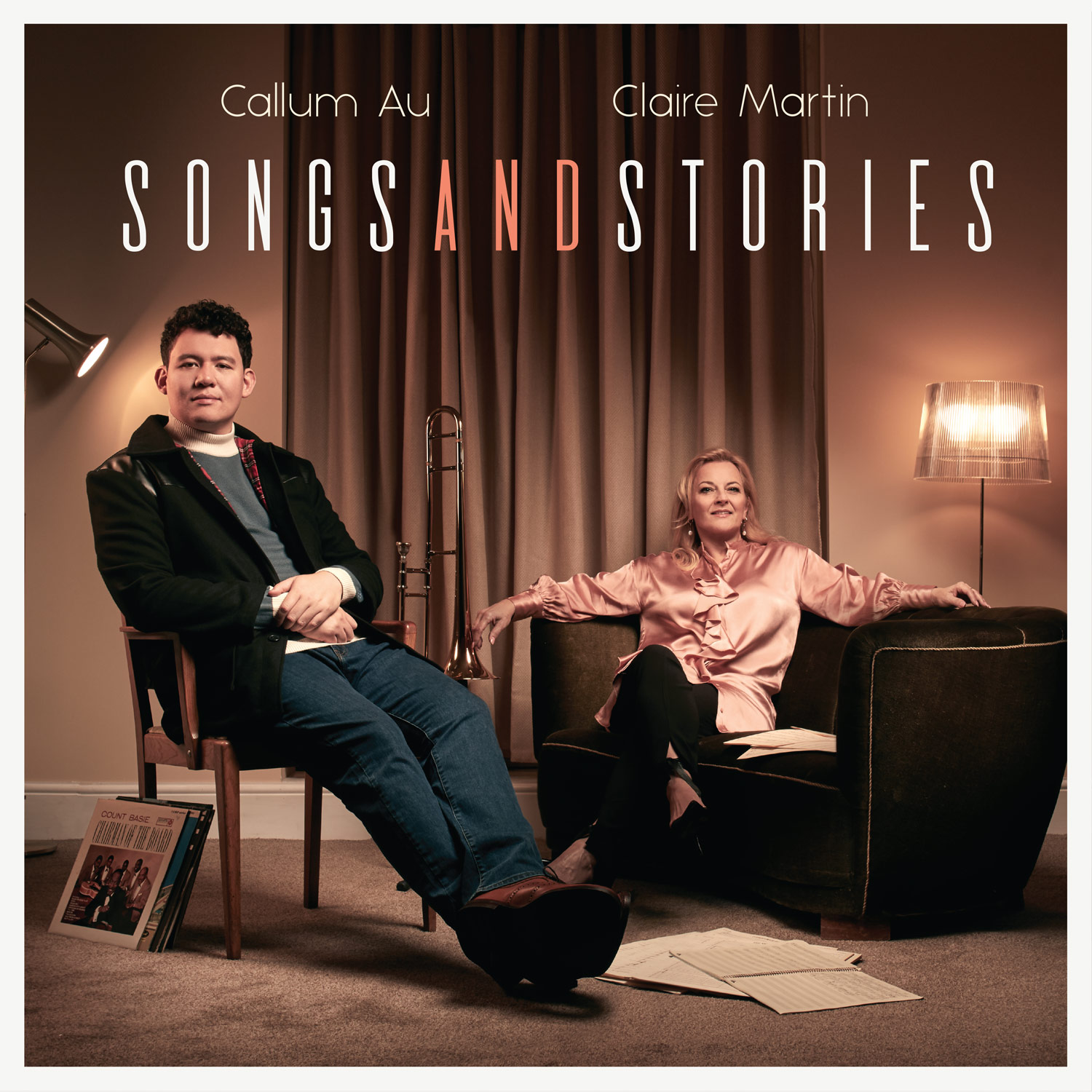 Update Required To play the media you will need to either update your browser to a recent version or update your Flash plugin.

Two leading lights of the British jazz scene: composer, arranger and trombonist, Callum Au, and internationally admired singer, Claire Martin, join forces for a new album, “Songs and Stories” on the Copenhagen-based Stunt label. The album, featuring a total of 82 exceptional musicians, from the UK, Europe and the USA, is a stunningly arranged selection of jazz standards and American Songbook classics, given compelling, sensitive, modern orchestral and big band treatments, whilst drawing extensive style and influence from the definitive peaks of this genre in past eras.

This is Claire Martin’s first big band or large orchestral recording – and she is thrilled to be working with Callum Au, who she regards as a “major talent”, with many great successes ahead of him. The album features a superb line-up of soloists and lead musicians including Ryan Quigley, Andy Wood, Freddie Gavita, Nadim Teimoori, Sam Mayne, Louis Dowdeswell, Andy Martin, Matt Skelton and John Mills – plus conductor Mark Nightingale.

The Bricusse-Newley standard “Pure Imagination” opens the album with a warm, stately, brass-led fanfare, blending gently into a lilting rhythm, at perfect tempo, ushering in Claire Martin’s sublime, mellow tones, reflecting all the wonder of the song’s lyrics.

The album continues with a punchy, swinging take on the Loesser-McHugh classic “Let’s Get Lost”; then a fabulously romantic reading of Hoagy Carmichael’s happy-sad “I Get Along Without You Very Well” with its flowing, shimmering strings and sumptuous arrangement.

Claire Martin has the ability to breathe fresh life and meaning into songs that have perhaps become taken for granted, and her vocal on “The Folks Who Live on the Hill” does just that – with the faultless emphasis and control for which she is renowned.

“Hello, Young Lovers!” is snappy, pacey and exhilarating spotlighting, as indeed the whole album does, Callum Au’s inspired approach to the arrangement – in this case, with a respectful bow to the golden age of jazz big Track six sees Cole Porter’s “I Concentrate on You” receive a remarkable transformation – with a delightfully insidious melodic riff, introduced initially on piano before the full band and strings gradually infuse the piece with colour and touch, including a fine tenor sax solo by Nadim Teimoori. This track is a high point on an album of undeniable peaks.

Claire’s vocal is, once again, outstanding – revealing her consummate ability to interpret lyrics, apply the ideal emphasis, and judge just when to employ a soft, restrained voice and when to let the controlled power of her singing have free rein.

The thoughtfully-chosen material continues with “I Never Went Away” (Richard Rodney Bennett), “The Night We Called It a Day” (Matt Denis-Tom Adair), “Stars Fell on Alabama” (Parish-Perkins), “Don’t Like Goodbyes” (Harold Arlen & Truman Capote) and “You and the Night and the Music” (Schwartz-Dietz). The whole album is sheer joy – full of invention, talent, virtuosity, passion and an overwhelming feeling that a large collective of musicians were all in absolute unison and enjoying every minute of it… as indeed every listener should, as well.

Callum Au has composed and arranged music in numerous genres, but especially for big band and large jazz ensembles. He has worked with some of the world’s leading artists, including Quincy Jones, Jamie Cullum and the Royal Philharmonic Orchestra – and on London stage shows including ‘The Rat Pack’, and ‘The Songbook of Judy Garland’; as well as BBC Radio 2’s Friday Night is Music Night and The Proms.

Claire Martin, OBE, needs no introduction to followers of music. One of the very finest jazz singers in UK history, and indeed high on any world list. She has won British Jazz Awards eight times; received an OBE and a BASCA Gold Badge Award for her contributions to jazz; recorded over 20 albums, including 18 for her customary label, Linn Records; and has collaborated with a host of musical celebrities including Kenny Barron, Stephane Grappelli, Richard Rodney Bennett, Martin Taylor, John Martyn and Jim Mullen.